Crime, according to "experts" does not occur, because it is unlawful.

No one reads the Twitter fact checks. That’s what they rely upon, anyway. Which is why they are able to cite such openly ludicrous information in the face of serious voter fraud allegations.

On Wednesday, nationally syndicated radio personality Jesse Kelly alleged: “PRO TIP: If your state cannot count every vote on election night, there’s cheating in your state. Entire nations count their votes on Election Day. If you can’t, it’s because you don’t want to.”

Almost immediately, Kelly’s tweet was restricted, unable to be shared, and branded with a “Misleading” label. So I clicked it, to find out what, in particular, was misleading.

PRO TIP: If your state cannot count every vote on election night, there’s cheating in your state. Entire nations count their votes on Election Day.

If you can’t, it’s because you don’t want to.

The Twitter link leads to a hodgepodge of information clearly not suited to the average voter. It begins: “Voter fraud is rare in US elections, according to Reuters, The Associated Press and election experts. Moreover, other forms of absentee balloting – such as mail-in voting and ballot drop boxes – include ‘built-in checks’ to ensure security and reliability, fact-checkers report.”

Pretty vague. And the last time I checked, Reuters and the Associated Press are not independent election observers. Anonymized, or unnamed “election experts” also scarcely constitute a “fact check”. So, we have to dip deeper. 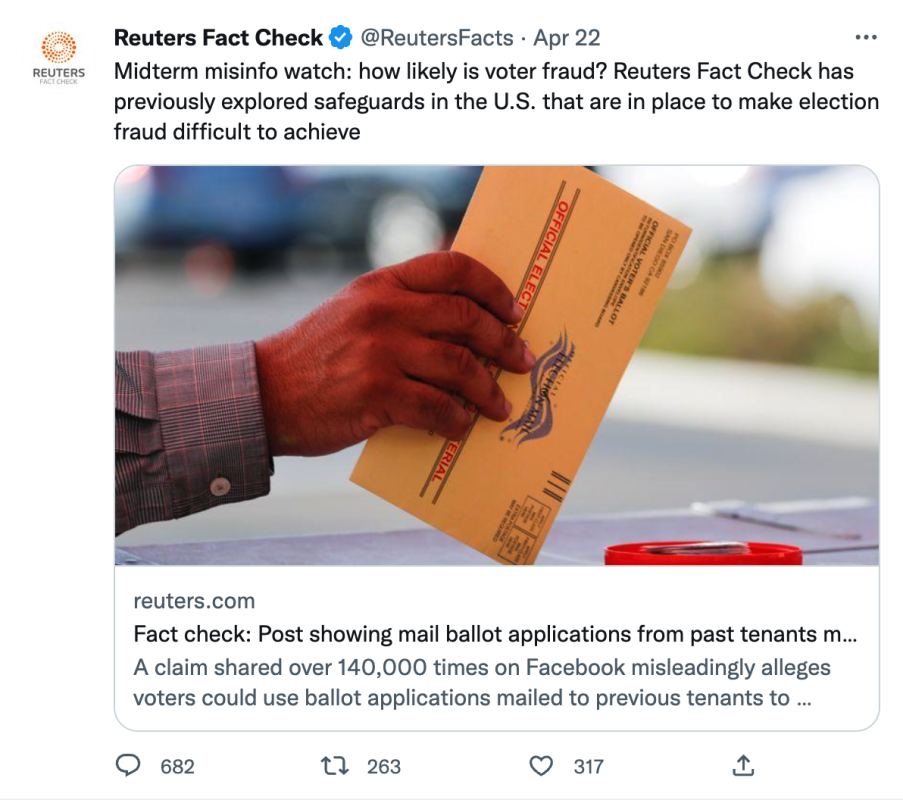 The first citation provided is, in fact, to a Reuters article from August 2020, re-shared to Twitter on April 2022. The article is also anonymized, using the byline “Reuters Staff” instead of attributing the work to a named human being. The headline reads: “Fact check: Post showing mail ballot applications from past tenants misleadingly oversimplifies voter fraud.

This part is interesting because even in the Reuters headline it doesn’t claim voter fraud is non-existent, nor does it refer to all allegations of voter fraud. Rather, the article appears to explicitly deal with one, singular post shared by a U.S. Air Force veteran in Texas, dating back to May 23, 2020. The post doesn’t relate to Texas, but rather, Michigan, underscoring the point that this was not a claim being made by the veteran, but rather, was a meme being shared at the time. To allege that this tenant could “send all these in and receive 5 ballots to vote” is misleading. Experts consulted by Reuters explained that while a voter might receive erroneous absentee ballot applications, to send these applications back, receive somebody else’s ballot and then submit it, would be committing a series of crimes.

This is in no way a “fact check” of the meme, nor of Jesse Kelly’s claim. The “election expert” cited beneath this explanation – that crime cannot be committed because it would be illegal to do so – is former Michigan state election director, Christopher Thomas.

Thomas was appointed by Michigan Democrat Secretary of State Richard Austin in 1981, and has most recently been sharing links to left-wing websites in support of the anti-life Michigan Attorney General Dana Nessel. He was also appointed to the Presidential Commission on Election Administration by President Barack Obama. 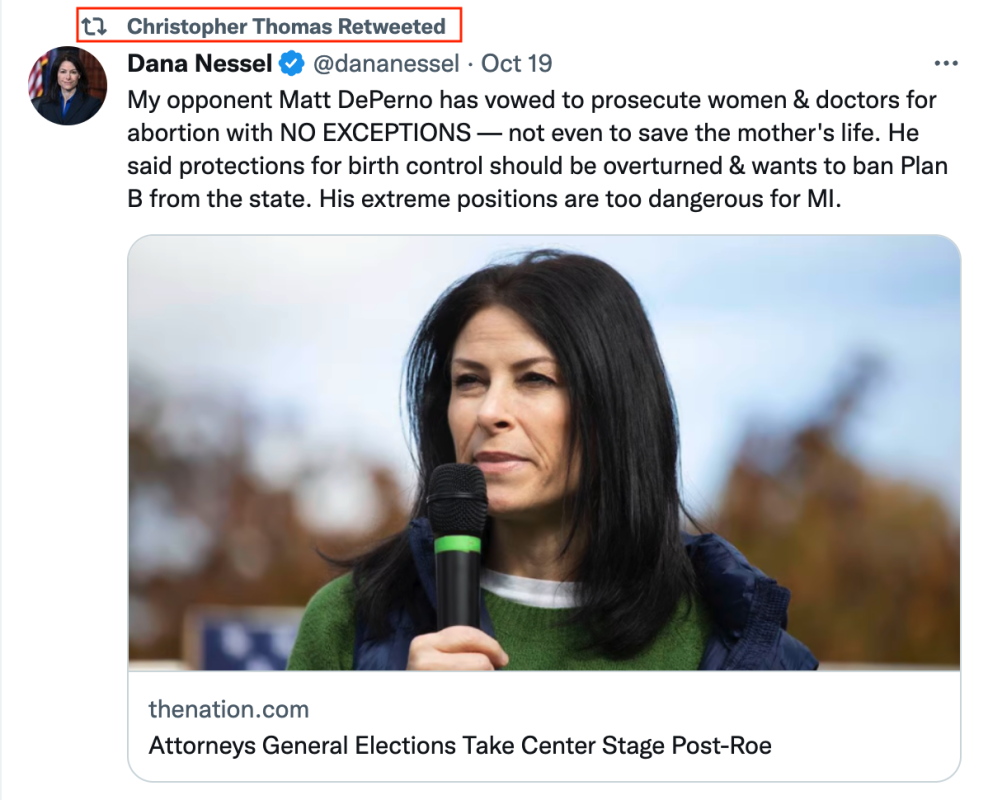 Thomas – now a “fellow” at the Bipartisan Policy Center – run by President Obama’s former energy advisor Jason Grumet and funded by major U.S. corporations – actually admitted that the 2020 election was “not perfect” and recently made a similar point to Kelly: that mail-in ballot returns should not take days to tabulate and disclose. 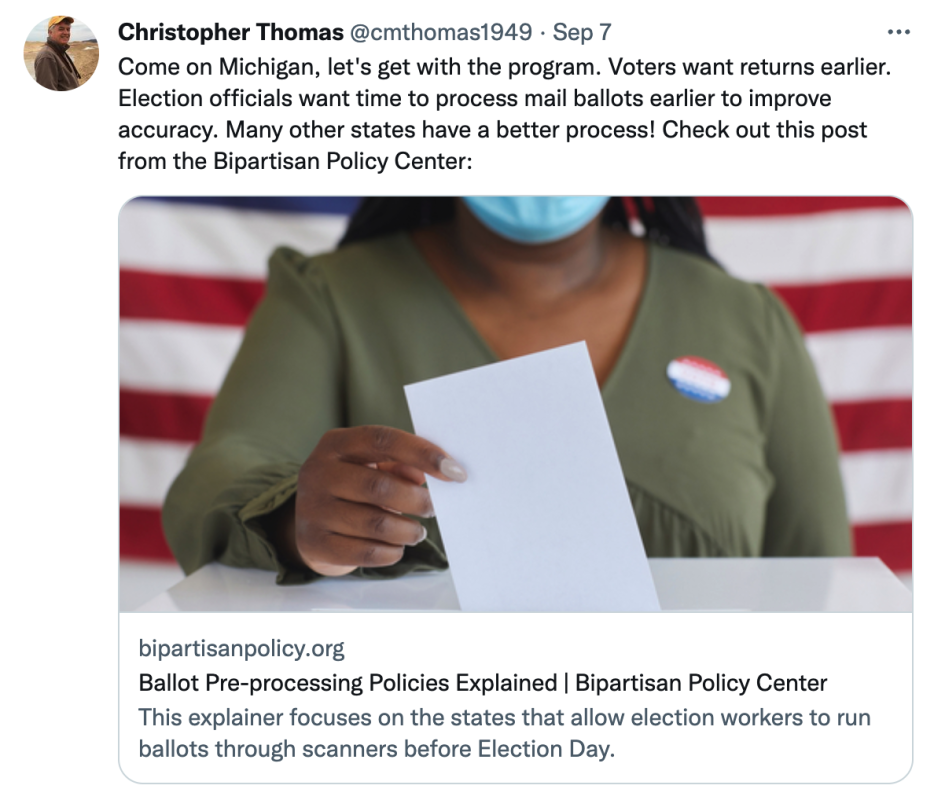 Twitter’s second link in “debunking” Kelly’s opinion is simply a tweet by a Turkish graduate student at Georgetown University, who also writes “fact checks” for Reuters.

Reuters Fact Check re-examined how and why voter fraud is exceedingly rare in the U.S. ahead of the 2022 midterms: https://t.co/YlwLLGFfAh

Togrul’s article quotes more “experts” who claim that because they have found no evidence of mass voter fraud, it does not exist. The link also provides plenty of evidence to show that voter fraud – despite their claims over small numbers – is prevalent in American elections.

Twitter’s third link in its “fact check” of Kelly is somehow even more vague: a mid-thread tweet, once again from Reuters, which states: “Ahead of the 2020 presidential election and afterwards, Reuters addressed multiple allegations by social media users claiming to show evidence of voter fraud. These cases, however, had logical explanations, such as miscaptioned imagery and footage taken out of context.”

Ahead of the 2020 presidential election and afterwards, Reuters addressed multiple allegations by social media users claiming to show evidence of voter fraud. These cases, however, had logical explanations, such as miscaptioned imagery and footage taken out of context

This “fact check” thread goes on, plonking random articles from Reuters and the Associated Press together with no discernible order, nor context.

Perhaps the greatest “tell” about the dishonesty in all of this is the lack of evidence presented to the contrary, of which there exists plenty.

The Heritage Foundation, for example, maintains a database of reported election fraud incidents alongside the ramifications. An Alaska election, not mentioned by Reuters, the Associated Press, or Twitter, saw one in 12 ballots rejected due to postal errors and voter identity discrepancies.

The “fact check” leaves out AP’s own claim from 2020, that mass mail-in voting has “featured high-profile errors – 100,000 faulty mail ballots sent out in New York, 50,000 in Columbus, Ohio, and a vendor supplying that state and Pennsylvania blaming delays in sending ballots on overwhelming demand.”

Nor is there any mention in the Twitter “fact check” of the banning of mass, mail-in voting in most other Western nations on account of the fraud associated with the practice.

In reality, the “fact check” is simply a mechanism by which to suppress constitutionally protected speech – Jesse Kelly’s informed opinion – and mislead the wider public about the dangers of mass, mail-in voting.

If Elon Musk is serious about “freeing the bird,” he will put an end to such antediluvian methods of stacking the information decks towards one side or another.