A significant majority of Representative Matt Gaetz’s constituents believe the congressman shouldn’t resign in light of allegations of sex trafficking or that he is guilty, according to a new poll.

The April 10th poll comes from Victory insights and finds that less than one in five of Gaetz’s constituents believe the congressman is “guilty” and over 60 percent feel he is innocent. 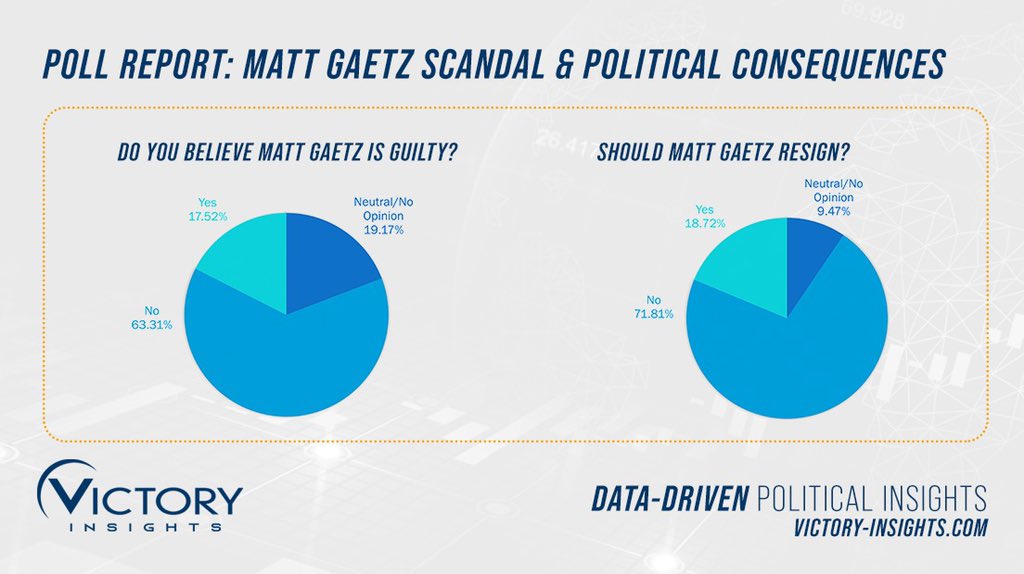 What’s more, the poll also found that 71.81 percent – nearly three-quarters – of Gaetz’s district felt that he should not resign. Just 18.72 percent feel that Gaetz should resign.

The numbers follow allegations stirred by the mainstream media that the Florida congressman engaged in sex trafficking of underage girls, with staffers from Gaetz’s office revealing the Federal Bureau of Investigation (FBI) used journalists as sources for tips. In recent days, the narrative has also shifted from allegations of Gaetz’s participation in a sex trafficking ring to scrutinizing alleged payments made on the app Venmo. And key players in the story, such as Bob Kent, who admitted to seeking $25,000,000 from the Gaetz family, have even given bizarre interviews on CNN.

Meanwhile, Gaetz’s story has not shifted, as he maintains the allegations are part of a broader plot to extort his family for $25 million. The congressman doubled down on his innocence while speaking at a Women for America First event on April 9th.