Lead Stories – a “fact check” organization linked with the Chinese Communist Party, which counts a majority of its staff as Democratic Party donors and/or former CNN employees – is attempting to censor right wing news host Tucker Carlson’s coverage of the Pfizer representative testimony in the European Parliament this week.

Asked whether or not Pfizer’s MRNA gene therapeutic (aka “COVID-19 vaccine”) was tested to see if it stopped transmission, the Big Pharma’s giant’s representative told Members of the European Parliament, “No … You know, we had to… really move at the speed of science to know what is taking place in the market.”

This is despite Pfizer representatives as well as major world figures such as President Joe Biden and his White House Chief Medical Advisor Anthony Fauci making repeated claims to the contrary.

Now, Lead Stories – which counts the Chinese Communist-owned TikTok as a major client – has placed a warning label over Mr. Carlson’s post on his official Instagram post. 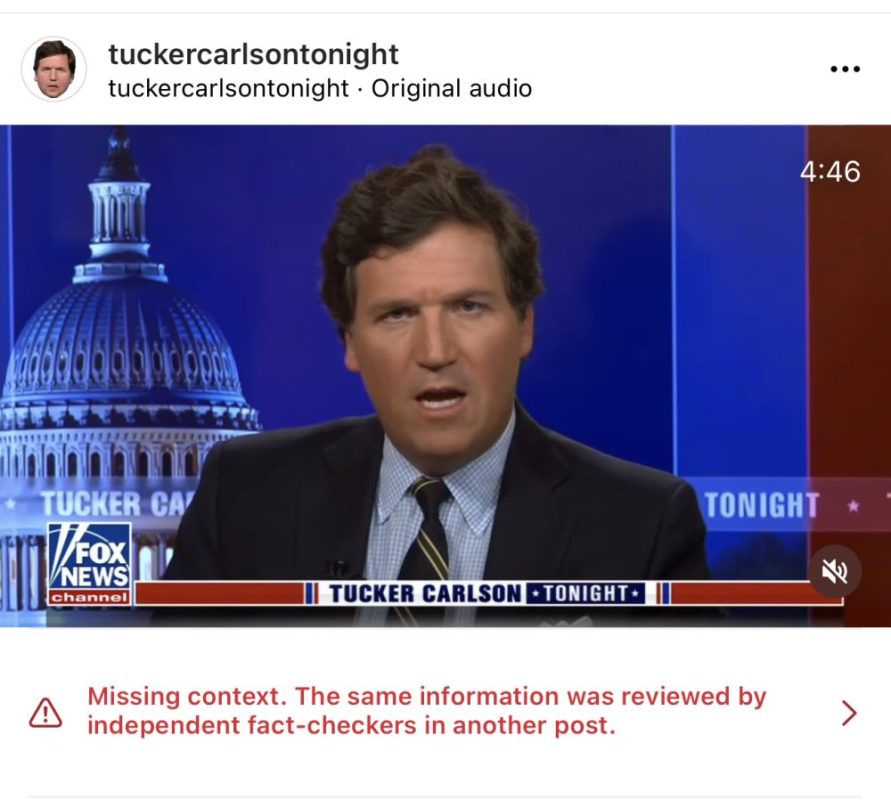 The label claims Mr. Carlson’s 4 minute 46 second video about the matter has “missing context”. The label redirects users to the Lead Stories website, which hasn’t updated its homepage since August 2022.

An article entitled Pfizer Vaccine Clinical Trial NOT Intended To Test Transmission Prevention — That’s Not How Clinical Trials Work then pops up, and cautiously claims:

While Pfizer and Moderna vaccines were shown to protect against illness and severe disease, the Association of American Medical Colleges notes vaccine clinical trials are not “designed to test whether any of the trial participants contracted COVID-19 but showed no symptoms.”

MUST READ:  'SPERMAGEDDON': Humanity May be Functionality Infertile by 2050, New Study Warns.

In short, the trials that tested the safety and efficacy of the vaccine were not designed to test transmission in part because the trial size and duration would have needed to be larger and longer and the goal was to prevent deaths.

The only problem with this claim is that almost every authority claimed the vaccine would indeed stop transmission. One of the most frequently used arguments for the vaccine hesitant to obtain the MRNA therapy was that it would “stop others catching COVID” from the reluctant. Many, as a result, were guilted into receiving the increasingly questionable “vaccine.”

The article itself was written by Madison Dapcevich, a writer for Lead Stories who appears to have held no fewer than 18 jobs in the past 11 years.

Dapcevich lists a five year stint in the U.S. Senate on her LinkedIn profile, but fails to declare for whom she worked. A cross reference with Alaska – her home state – reveals her job was for anti-Trump Republican Lisa Murkowski, who looks increasingly likely to lose her Senate seat to the Trump-endorsed Kelly Tshibaka.

Dapcevich has since worked for a part government funded pro-regime news organization called InterNews, which counts amongst its donors George Soros’s Open Society Foundations, the Omidyar Network, Google, and others. She also spent a year at NBC, and two years at the highly partisan internet “fact checker” Snopes.

‘SPERMAGEDDON’: Humanity May be Functionality Infertile by 2050, New Study Warns.